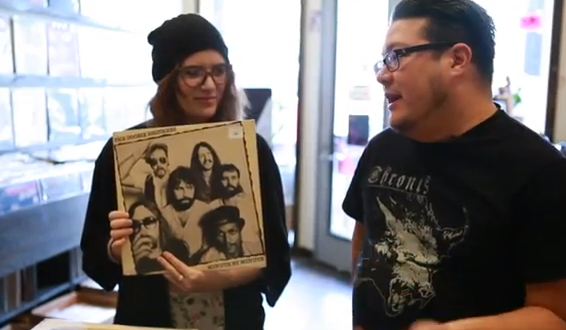 One of my favorite bands Best Coast (of Mexican Summer records) show us some of their favorite Dad records! Bethany Consentino and Bobb Bruno show the records that have influenced their music at CO-OP 87 record store in Brooklyn, NY.

They refer to the bands that their dad’s listened to as “Dad Rock. ” The Doobie Brothers, America and Fleetwood Mac are some of them. I won’t spoil any others, so you’ll have to watch the video for yourself.

“Super Dad Rock” would be considered as Kenny Loggins according to Bruno.

Cosentino and Bruno also share some of the records they listened to growing up.

Best Coast will be releasing some new material on Record Store Day on April 20th. The 7” will feature two new recordings: “Fear of My Identity” and “Who Have I Become”. To go along with the “Dad Rock” theme, Cosentino’s Dad plays drums for on the tracks.

Best Coast will be hitting the road at the end of the month, you can find their tour dates here.

Having a band like Best Coast on Mexican Summer records has been a success.
The label’s 2009 release of Crazy For You by Best Coast which sold around 57,000 copies, 10,000 of which were LPs.

Mexican Summer/Kemado Records opened their retail space Co-OP 87 back in October 2009, to sell their own records and from other local labels. It’s been called a “vinyl co-op store.”

Tom Clapp, Andres Santo Domingo co-founded and own the label and record store. Keith Abrahamsson is the head of A&R and a partner.