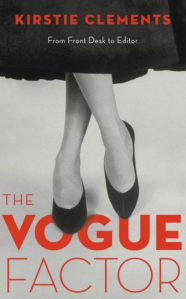 Former Australian Vogue editor Kirstie Clements has just published a new memoir, The Vogue Factor. In the book, she focuses on the ever-changing fashion industry; frankly lamenting on the good, the bad, and the ugly sides of the industry she was witness to for more than 25 years during her career.

According to the book’s synopsis, “In May 2012 Kirstie Clements was unceremoniously sacked after thirteen years in the editor’s chair at Vogue Australia. Here she tells the story behind the headlines, and takes us behind the scenes of a fast-changing industry…” The memoir provides Clements’ account of her time as editor for Vogue Australia, as well as commentary on the fashion industry at large, a dazzling culture brimming with celebrities, drama, and of course, fabulous clothing.

Recently, in honor of The Vogue Factor’s April release, the UK Guardian published an excerpt from one of the chapters of the book, in which Clements discusses the troubling realities within the modeling industry. She often was privy to the darker side of modeling and its horrifying effects on young models worldwide, and reflects on her first hand experiences as well as the current state of the modeling industry.

In this section, Clements candidly discusses her disdain for the fashion world’s indifference to eating disorders and self harm, issues that run rampant in an industry that often dehumanizes models in order to sell clothing. At one point she writes, “It is the ultimate vicious cycle. A model who puts on a few kilos can’t get into a sample size on a casting and gets reprimanded by her agency. She begins to diet, loses the weight, and is praised by all for how good she looks. But instead of staying at that weight, and trying to maintain it through a sensible diet and exercise, she thinks losing more will make her even more desirable. And no one tells her to stop.”

If this fascinating, disheartening chapter is any indication of the rest of the memoir, then you can expect The Vogue Factor to be a poignant and compelling, honest take on the fashion industry.

To read the rest of the chapter, you can find it here.