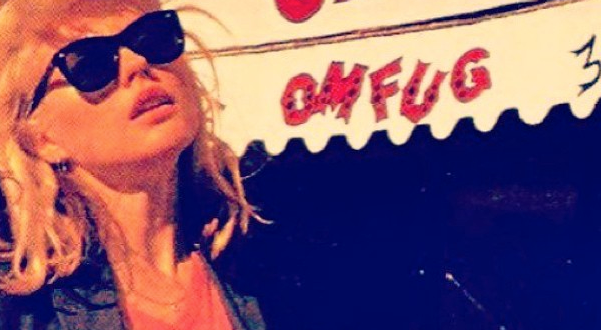 Many were unsure if the 2013 comeback of punk fashion was a trend likely to endure, but with the Metropolitan Museum of Art’s summer exhibit “From Chaos to Couture” and the star-studded film CBGB hitting theaters this month, it seems as if the counterculture style isn’t going anywhere. CBGB is a film dedicated to the music, fashion, and attitude of the era when punk subculture was just beginning to emerge. Primarily focused on the career of club-owner Hilly Kristal, played by Alan Rickman, the film explores the lives and early careers of some of punk’s biggest icons.

Style and music icons Patti Smith, Debbie Harry, Lou Reed, and Joey Ramone are depicted in the film as emerging artists in the underground punk-rock scene. CBGB was not only a grimy, beloved music venue, but a space where new talent could meet, and where the do-it-yourself punk aesthetic was cultivated. It’s here where many bona fide musicians got their start; it’s where they performed unabashedly on a rickety stage wearing leather, chains, cropped hair, and garments that illustrated their rebellion against pop culture.

One of the film’s stars, Ashley Greene, who plays Lisa Kristal, explains, “There’s a general misconception that punk was a violent, dirty movement and atmosphere…[But] it was actually a supportive, collaborative thing. There was heart and passion behind it,” of the kind of misconceptions that surround punk culture. Today, the intrigue surrounding the counterculture’s heyday has sparked a comeback of punk fashion. Studded belts, denim and leather jackets, band buttons and combat boots are not uncommon in street style, or at high-end retailers.

Even if you don’t identify with punk-inspired fashion, most people can agree that the attitude and aesthetic have influenced clothing and style greatly in recent years. Do you think that museum exhibits and films immortalizing punk style are a testament to its longevity?