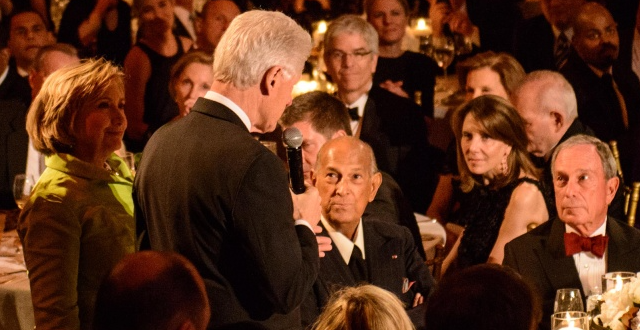 Late last month, fashion icon Oscar de la Renta was presented with Carnegie Hall’s Medal of Excellence, an honor bestowed annually. Hundreds of friends, admirers, and some of fashion’s biggest names surrounded the designer, who is known for his bold, couture designs, and bold, no-holds-bar personality.

The Medal of Excellence Gala was an event designed to honor the iconic designer for his prominent role in the world of fashion, as well as his philanthropic efforts over the years. Mr. de la Renta was applauded heavily by the some 400 adoring guests in attendance, a list of people that included New York royalty like Henry Kravis and his wife Marie-Josee, the ever-fashionable and formidable Vogue editor Anna Wintour, former NYC Mayor Michael Bloomberg, as well as many other fashion industry heavyweights like Ralph and Ricky Lauren and Diane von Furstenberg.

Bill and Hillary Clinton were also in attendance, and had some lighthearted, lovely things to say about the incredible designer and fashion legend. Said Bill teasingly, “Oscar, you would be an easy person to resent because you are good at everything you do,” in regards to the designer’s prolific fashion presence. He continued, “Tonight, I would like to say, you deserve the medal of excellence in friendship, and I love you for it.” Hillary, who has been picked and prodded at by the media throughout her career for her fashion choices, joked, “This man has been working for more than 20 years to try and turn me into a fashion icon. And despite his best efforts, year in and year out, he’s never given up.” Hillary also notes that Oscar de la Renta possesses “extraordinary intelligence and talent,” and that his mark on the fashion industry is broad.

Vogue reports that the overall sentiment of the evening was one of deep love and admiration for the designer, who has been dressing the most prominent members of entertainment, fashion, and politics for decades. For more on the fabulous Medal of Excellence Gala, take a peek at Vogue’s full coverage of the event.